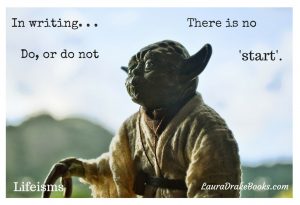 I do a lot of critiquing. As I get better at craft, I’m starting to catch the nuances of good writing; things beyond the basics of POV, show don’t tell, etc. They’re subtler and harder to spot, but I believe they can be the difference between a ‘good writer’ and a popular author. And yes, I have these same problems too.

When he stepped out, he had no smile for her. He avoided meeting her gaze. Even though his clothing was freshly pressed and his shoulders were back, he looked drained, as if he’d just run the obstacle course.

The presentation must have gone badly.

Do you see how the thought is not only unneeded – but that it weakens the sentences above it? And it slows the read. Write only thoughts that the reader couldn’t guess. That can be powerful – showing that the character is keeping something from the others in the scene.

Knowing I can’t go out there, the walls seem to crowd me, closer than they were a few minutes ago. Is it going to be like this until the trial is over? If so, my bail was a waste—I’m just in a cushier, more familiar prison.

Her sobs over the phone claw my insides.

Halfway out the door, Adam grabbed him.

“Hey, lemme go!” The punk twisted to see who had the collar of his shirt.

Do you see how the way this is worded blurs and distances us from the POV character?

Halfway out the door, he grabbed the little thief.

Why? Because if I’m firmly in Adam’s POV, I shouldn’t have to use his proper name. The way it’s originally written, it’s distant; almost from a narrator’s POV.

Again, we’re in Suzie’s POV. We don’t need her name. This is also a minor POV violation – Suzie can feel the blood in her face, but she can’t see that her face is red.

Better: Blood pounded to her face, flooding her with the realization that she’d just put her mother in the same category as the wino.

“I’ll walk you back to your ship,” she said, falling into step beside him.

“I’ll walk you back to your ship.” She fell into step beside him.

This is a nuance, but can you see how the second is more natural and ‘flows’ better? It helps the reader be in the scene, instead of just reading about it.

“What was that?” she asked. It sounded like someone had pinched a baby.

Since there are only a man and a woman in this scene, and we know it’s not him from the line before, the reader will deduce that she asked this. Which means you don’t need the tag.

Margie Lawson is the Queen at this. You can read a blog she wrote about it, here.

These are small nuances, but important ones. The reader won’t think, “I don’t need that tag.” But these are the things that show an agent/editor or reader that you’re good.

It was insane to expect him to restrain himself. “That’s like sending an alcoholic into a bar that’s giving away free beer.”

I’d make the case that not only is the beginning unnecessary, it weakens the line of dialog. Showing is almost always better than telling, and both is always the worst.

Exclamation points!!!! You get three per book. Use them wisely. (and yes, I have the same limits, and I hate them just as much). And never two pieces of punctuation at the end of one sentence. Yes, I know everyone uses it on social media – but you’re a professional.

Along the same lines – repetition in general –

But there are subtle shades of repetition, and it’s easy to miss.  Here’s some examples:

“Then why don’t you tell him, if it bothers you so much?” Richard visibly stiffened at Michelle’s suggestion.

First, the adverb is unnecessary. We’re in Michelle’s POV – so if she noticed, it had to be visible, right? Second, you should trust the reader to know that he stiffened because of what she said. It also breaks Margie Lawson’s rule: What’s the Visual?

Written this way, it would draw the reader closer:

Richard’s spine straightened and his lips pinched in his signature ‘irritated librarian’ look.

I’ve got more male in my life than I need already.

I’ve already got more male in my life than I need.

Ones I see very often in others’ work are:  Over, under, turned, back, down, up, just.

She caught herself squirming in her seat and forced herself to stillness.

Vale clears his throat. A shudder vibrates up my spine.

Vale’s shoulders tip back, just enough to make the crease across the front of his shirt pull smooth.

Priss buried her nose in her cup.

When the woman touched his shoulder, the kid shrugged her off.

The woman touched his shoulder. The kid shrugged her off.

She knew it was hopeless.

See what I mean? They add words, but not meaning. Along those same lines:

Why use “moved” which tells us nothing instead of jerked (oops) jogged, or stumbled?

Why use “started” rather than just showing someone doing something? You can’t start walking, start making cookies, or start getting angry.

“Almost” is another word that doesn’t work very often. Either someone does something or doesn’t. How do you ‘almost’ do something like smile?

I think we often tell the reader much more than they need to know. In big ways, like backstory dumps, but also in subtle ways that are harder to catch. But they both irritate the reader – if you have enough of them, the reader will abandon the book. They may not even know why – just that it didn’t engage them.

See, readers want to be engaged. To think, and to figure things out – not just to have it all handed to them. In other words, they want to be in your story. A part of the action. All these nuances prevent them from doing that.

Here’s some examples of small ones:

“The small canoe rested in the water, floating beside a long wooden dock.”

Where else would a canoe next to a dock rest, but in the water? And if it’s in the water, it’s floating, right? See how neither of those references are needed? Use that room to put us in the scene; engage our imagination and our senses.

“A red canoe with wood trim bobbed beside the wooden dock, waves slapping its sides.”

“None of these plants are used for food. They’re purely ornamental” See how that says the same thing?

A stiff smile on her lips…. Where else would a smile be?

Sonja glared, and retreated a step back – retreated is back.

From my book, Reasons to Stay:

She stopped a few feet short of the open grave. Her mother was down there. Shouldn’t she feel something beyond tired?

“Come, Ignacio. It’s time to go.” A meager woman stood at the foot of the grave, her face and raincoat set in the same generic authoritarian lines.

Priss recognized a Social Worker when she saw one. Given her past, she should.

Give us your tips with examples in the comments!