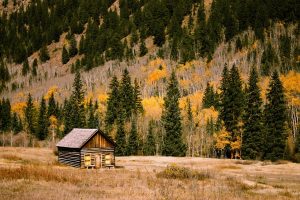 This is not that cabin

When people ask me why I began writing, I lie. I tell them that I had an idea that wouldn’t let me go. And that’s true, as far as it goes. But the reason it wouldn’t let me go is the real story. See, I write about my own demons. I think on some level, we all do, don’t we?

I’m not going to bore you with all the backstory, but suffice it to say that my decisions ended me at nineteen, with a guy I’d known a total of ten days before I said ‘I do’, living in a log cabin in the Back of Beyond, Michigan.  We had one car, which he took to work each day. I wasn’t allowed to work; a woman’s job was in the home. The mailbox was a mile walk away, and town was ten. We didn’t have a phone.

There were other cabins within a mile of ours, but they were summer homes; there were no neighbors in autumn. We had electricity, but no money for propane. No worries.  We cut wood to keep us warm for the coming winter. But no propane meant no gas for the stove, range, or washer and dryer. So I learned to cook everything in an electric Dutch oven. I washed our filthy blue jeans with a floor brush on the boards of the porch.

Don’t get me wrong, it was beautiful. The cabin was beside a river, and the trees were bursting with color. I fished, and picked wild huckleberries for pies. Fires at night were warm and romantic.

I thought it was my fault. After all, I knew almost nothing domestic. He even had to teach me to cook.  I made mistakes, I screwed up. I learned as fast as I could, trying to make him happy, and proud. It didn’t work. He still got mad. No, furious. And I’d end up with bruises. But he was so sorry afterward that I believed him, that it wouldn’t happen again. I believed it because he believed it.

The highlight of my week was going to town on the weekend to do laundry, because I could go to the library. I was always a reader, and now it sustained me – I could go away in my mind. They’d only allow me to check out seven books at a time, so I’d choose the heftiest tomes I could find, so I’d have lots to read during the week. 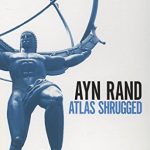 That’s how I came upon Ayn Rand. Atlas Shrugged gave me the answer that I had missed in all those hours of thinking. It never occurred to me that I was the answer.  It was a beginning.

Your turn. What book has touched your life? Will you share it?