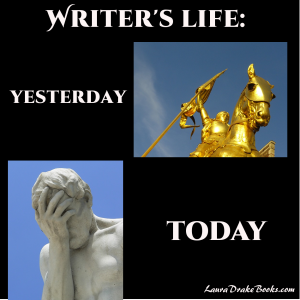 I traveled to speak at a writer’s group last weekend (I do that, you know. Contact me if you’re interested). I was talking to a writer there, and she bemoaned the fact that she didn’t have this down yet.  She was still making mistakes. I’ve heard this many times. I’ll bet you’ve said it to yourself, too (God knows, I have). So I thought a reminder of what ‘writing’ entails, might help you give yourself a break already!

First the science: (and thank you to Roger Manning for explaining this to me).

Higher-order thinking, known as higher order thinking skills (HOTS), is a concept of education reform based on learning taxonomies .The idea is that some types of learning require more cognitive processing than others, but also have more generalized benefits. You can read more about it HERE, but I think a chart is easier to understand:

Trust me, there are a lot more items in the lists, but I didn’t want to bore you. But take a look at the items here – any look familiar? Yeah. Most of them are used in creative writing! YIKES!

“The reason typos get through isn’t because we’re stupid or careless, it’s because what we’re doing is actually very smart, explains psychologist Tom Stafford, who studies typos of the University of Sheffield in the UK. “When you’re writing, you’re trying to convey meaning. It’s a very high level task,” he said.

As with all high level tasks, your brain generalizes simple, component parts (like turning letters into words and words into sentences) so it can focus on more complex tasks (like combining sentences into complex ideas). “We don’t catch every detail, we’re not like computers or NSA databases,” said Stafford. “Rather, we take in sensory information and combine it with what we expect, and we extract meaning.”

When we’re reading other peoples’ work, this helps us arrive at meaning faster by using less brain power. When we’re proof reading our own work, we know the meaning we want to convey. Because we expect that meaning to be there, it’s easier for us to miss when parts (or all) of it are absent. The reason we don’t see our own typos is because what we see on the screen is competing with the version that exists in our heads.

This can be something as trivial as transposing the letters in “the” to “hte,” or something as significant as omitting the core explanation of your article. In fact, I made both of these mistakes when I wrote this story. The first was a misspelling in a sentence that my editor had to read aloud for me before I saw it for myself. The second mistake was leaving out the entire preceding paragraph that explains why we miss our own typos.”

You can read the whole article HERE.

See? We’re trying to complete low level tasks and very high level tasks at the same time! Can you imagine how complex your brain is to be able to do that? 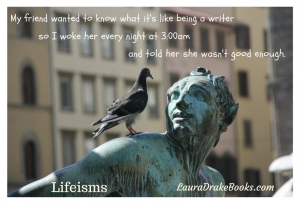 Then there’s the mechanics:

Yes, we have way more tools than they did years ago (Thanks, Word, for telling me when I’m wrong-most of the time), but this is the nit-picky, in the mud, the blood and the beer editing that make my eye twitch. Even when we’re careful, we tend to read what we meant to write, not what’s on the page.

Suggestion: Have Word, or another program, read it back to you. You’ll hear things you won’t see: missing words, clunky sentences, change in tense, etc.  OR, pay someone to do it. It’s worth it to me not to have to go over that ms one more time (and you know I’m cheap).

Sentence structure, punctuation, adverbs, pronouns, dangling participles! There is SO much to know here, and finding out you’re doing something wrong after your book is published is uber-embarrasing. Word can suggest, and Margie Lawson is the queen of rhetorical devices, but when it comes right down to it, you have to know this stuff to earn your chops as a writer. Personally, I’ll never get Lay vs Lie (had a college professor try) and I’ll admit to comma-drama.

GETTING THE STORY OUT OF YOUR HEAD, AND ON THE PAGE IN A COMPELLING WAY

It seems so easy when you’re reading a good book, but anyone who’s tried to write can tell you, it’s like the Olympics; Those little girls make gymnastics look easy because they learned it right after walking, and then practiced for years.

The only thing that works here is sweat-equity. Sorry, but if I knew a faster way, I’d be using it. Keep writing – you’ll get better.

This is probably the highest thinking of all. We all know a story needs a beginning, middle and an ending. Sounds simple. It isn’t.

And you wonder why you keep putting e after I? Why you mix tenses?  Sheesh people, you’re doing the equivalent of riding a unicycle and learning to swing a golf club, all at the same time!

It takes YEARS to master all of the above, and I haven’t even mentioned voice! So give yourself a break. Give yourself time. Adopt a child’s view of mistakes: they’re just ways that didn’t work.

Be gentle with yourself, people, keep going, and you’ll get there. I guarantee it. 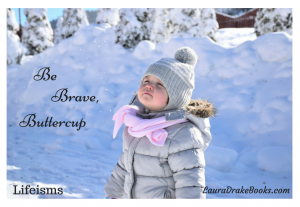 Do you scold yourself for mistakes? Friends who do? What’s your worst offender?