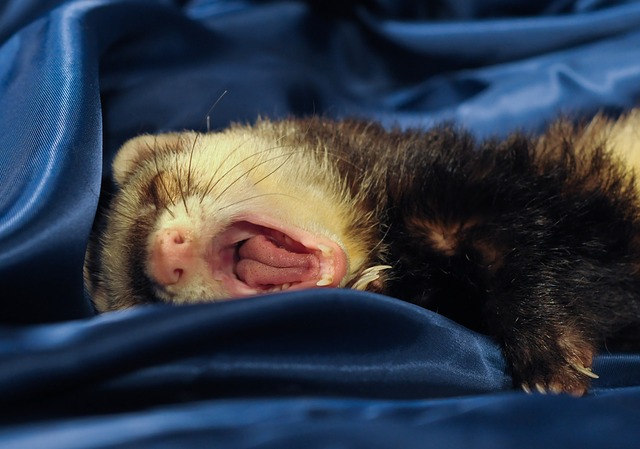 I knew you always wanted to see a ferret yawn. Or is that just me?

I’ll admit it. I can write a scene that only a mother can love. One so sappy you’ll need to test your blood for sugar afterward. A sure cure for insomnia. (as boring as all these old saws).

And when the author knows it sucks, you can imagine the sheer volume of suckage I’m talking about.

We all fall in love with our words, and at times we get carried away. We all love our characters, and don’t want to be mean to them.

So when you sense you’ve got a less than stellar scene, or when your critters (your critique group) tells you it needs work, here are some ideas that may help you salvage it from the scrap heap:

Here’s an example from the beginning a WIP (work in progress) of mine that shows not only how to tighten, but why.

I find knowing the exact time and place of my death exhilarating.  It’s as if, all my life, in some primordial, subliminal part of my brain, I wondered: Is today the day?  Is a lump growing, even now? Has the bus that will hit me, just left the station? Those questions are behind me now. Maybe that’s why I feel lighter today. Stronger.

Leading the pace line, I pump my way up the hill, breathing hard, but with no weakness or cramping. The sun burns through my thin jersey and sweat from my forehead drips onto the handlebars. I welcome it. Such a normal, everyday thing. Who knows if I’ll feel it again?

Will Jo and my daughter stay in touch after I’m gone? Reality chuckles in my ear. I have no doubt Jo will try. But Bee . . . is Bee. A protective momma-bear to those she loves, suspicious of all outside the circle. And she’s spent years guarding the gate, making sure Jo stayed outside. Some things can be mended, but some are irrevocably broken. Unfixable.

Bee wasn’t always that way, but losing her mother at such a young age scratched deep gouges in her psyche. She grips those she needs tightly, as if by sheer will she can snatch them back from disaster. She doesn’t realize that grip can be suffocating, and have an equal and opposite reaction in the one being squeezed. When the kids get to be teenagers, she’ll learn. I’m sorry I won’t get to see that. I think I’d enjoy it quite a bit.

Near the crest of the hill, Pete passes me, panting, but still smiling. “Thanks for the pull, Dude.”

I flip him the bird and pedal on.

Jo is somewhere in the pack behind-hopefully dropped and falling back. I still can’t imagine being anywhere that Jo isn’t, but death doesn’t care about that. This is going to be hell on Joan. She’s going to be angry with me, possibly for a long time. I snort a laugh. Who am I kidding? Jo will never forgive my treason. She’ll see my leaving her behind as the ultimate betrayal. We’d planned to die together in our sleep, at some unspecified, but very ancient age. Our friends call us ‘soul mates’. Such a flippant new age-y term to explain something there aren’t words for. My heart pinches, but not from exertion. For twenty years, Jo and I have existed in a self-contained bubble, thriving on simply breathing each other in, and out. She’ll have to learn to breathe on her own again.

Not that I have any doubt that she will. Jo is indomitable. A scrapper.

I’d very much like to see that, too, but I don’t believe I will. I leave theological certainty to Bee.

I crest the hill, the freehub ratchet clicking faster as I pick up speed. My heart rate kicks up as I realize how close I am. What have I forgotten? I’ve been over every detail, every policy, every eventuality. There’s nothing left to do.

Pete waits at the intersection, for the group to catch up.

Keeping my fingers off the brakes, I shoot past him, against the light.

I love you always Joa-

Not bad, right? The man shown appears to be thoughtful, educated – in keeping with his career.

Except for one thing, that Margie Lawson pointed out.

He’s riding to his DEATH!

If you know you’re going to die, you’re frightened, second-guessing, panicking. Your thoughts would be broken, and details would be a blur.

Duh. Man, did I feel stupid.

Here’s how it changed.

Leading the Saturday morning ride, I pump my way up the hill, standing on the pedals, breathing hard. My legs are still working, still strong.

Sun burns through my jersey. Sweat drips onto the handlebars. Such everyday-taken-for-granted things, but not today. Knowing I have only minutes to live have made them precious. Glorious.

Will Jo and my daughter stay in touch after I’m gone? I have no doubt Jo will try. But Bee . . . is Bee. She’s spent years guarding the gate, keeping her stepmother out. Some things can be mended, but some are forever broken. Unfixable.

Near the crest of the hill, Pete passes me, panting, but still smiling. “Thanks for the pull, Professor Pud.”

I flip him the bird then kick it. In twenty yards I’ve gained a bike length on him. Reaching the top first is a very serious game we play. Played.

Jo is somewhere in the pack behind me-hopefully dropped and falling back. I still can’t imagine being anywhere that she isn’t, but death doesn’t care. I stand on the pedals to crank harder. Jo will never forgive me. My heart tugs, but not from the exertion. For twenty years, Jo and I have lived in a bubble, breathing each other in, and out.

She’ll have to learn to breathe on her own again.

Still in the lead, I crest the hill, my bike’s freehub ratchet clicking faster and faster. I’m close. My heart rate kicks up. What have I forgotten? Details I’ve been over and over. There’s nothing left to do, except . . . this.

We’re flying down, pacing the cars. Every Saturday, I have a second of sadness at the hill’s end. Freedom whistles past my ears. This time I don’t have to brake.

Pete does. He falls back. “Hey, Pud! Brake! Brake!” Then he’s gone, one more, left behind.

I flick a glance at the Garmin—thirty mph. It’s time. Fear roars. I lock my fingers on the bars, willing them not to move. “No brake, no brake, no brake!” The bike shimmies, on the edge of control. I slam my eyes shut. A gust of elation pushes me across the finish line. I shoot into the intersection, against the light.

I love you Joan. Forev-

Have any other tips for us to fix a boring scene?